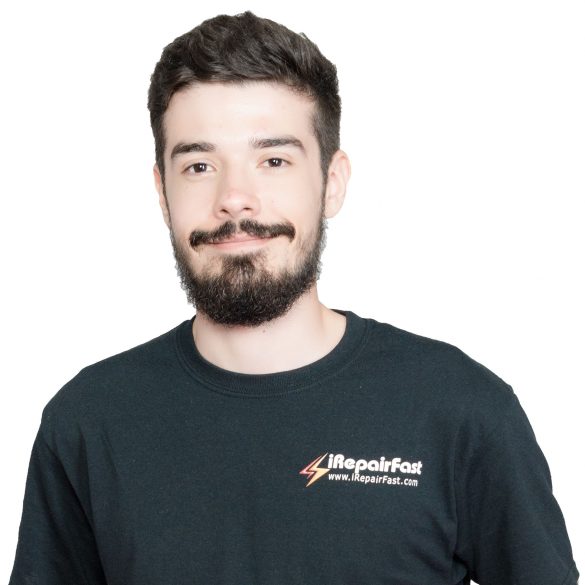 At the Fruit Cove location, I am the main iPad and tablet technician. Nearly every iPad dropped off here goes through my hands for repair. Apart from tablets, I work on many of the phones we take in here for cracked screens, bad batteries, or faulty buttons. I love to tackle new and challenging problems with both the usual and unusual devices. Recent projects have been the JBL Pulse, Nintendo 3DS, and Beats headphones.

Before joining the iRepairFast team, I had previously taught myself how to fix a few screens for my family. I had fixed my iPod Touch in high school as well as a couple of iPhones. In late 2016 I was hired at the Ponte Vedra location. For the next three months, I was trained by the skilled team of Mike, David, and Dylan. Later I joined team Fruit Cove and took over the role of device technician here.

My hobbies include computer coding and rock climbing. I’ve taught myself to code in the Python language, and currently, I’m learning Swift for Apple programming. Here in Florida, it’s only possible to rock climb at indoor gyms which I do weekly. I’m able to redpoint up to 5.12b indoors but haven’t pushed past the 5.10 difficulty outdoors. A couple of times a year I’ll try to make a trip to climb outdoors in Chattanooga.

For more about me, check out my vlog below! If you’d like to talk to me, just shoot me an email at Fred@iRepairFast.com!

We are a family & veteran owned business that provides fast, affordable, and quality repairs for all of your devices.